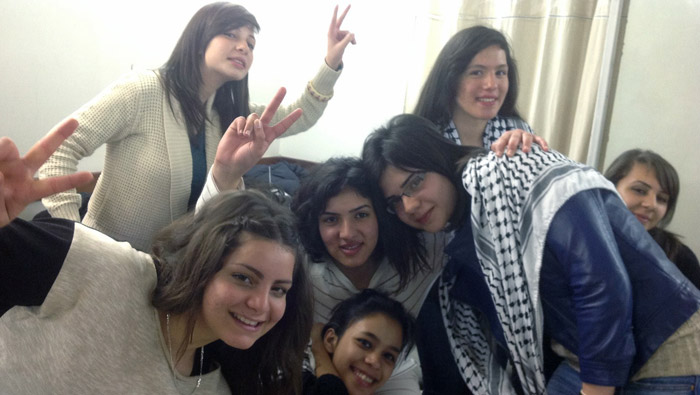 At the end of November and at the start of December we set up two Youth Workshops, below are the summaries of both workshops.
Youth Workshop for Brenner High school (a Jewish high school) and Nazareth High School (an Arab High School) on 23-25 November 2014
“When I first got here I thought we could leave the country as it is, a Jewish state that has Arabs in it, but now I cannot call it a Jewish state and think that it’ll be good for them”
In preparation sessions for the workshops, both at Brenner and Nazareth high schools, there were more students that were interested in taking part than we could accommodate. We were surprised because, following the war, we expected that there would not be much interest in our workshops. Very recently a Jewish school in Rishon LeZion had cancelled their participation in another project at the last moment. The prevailing atmosphere on both sides was one of despair about the violence that surrounds us and the increasing racism towards Arabs.
We thoroughly prepared the teachers and facilitator staff of the workshop to safeguard the nature of the discussion, to prevent aggression and advance deep conversation that fosters respect. The students took the workshop very seriously, they were not late, and they did not skip any activities. The first day was devoted to cultural and personal acquaintance. Students raised suggestions for how to create a discourse that respects the ‘other’ and wrote these suggestions on the board, these suggestions stayed on the wall throughout the workshop in order to keep a respectful discussion going. As evening approached the students were asked to speak about the conflict through pictures in a method called photolangage. Then we held a cultural evening that consisted of all kinds of activities in which the Jews and Arabs had to work together. For example, there was a competition to solve quiz boards containing tasks that required knowledge of both cultures, such as leaders, proverbs, foods, and more. The students really enjoyed this activity, which is called “Mujadara Borscht”, named after two traditional dishes, one of the Palestinian Arabs and one of the Eastern European Jews.
The next day the group discussed political topics connected to the relations between the two peoples. Several issues were raised, such as discrimination against Arabs by the state; the war with Gaza that took place in the summer of 2014; the army (the Jewish students are a year and a half before conscription); stereotypes; Jewish fears; and many other issues. Despite the sensitive and painful nature of these issues, the group succeeded in speaking about them in respectful way, under the guidance of the facilitators.
After lunch the students ran a simulation of peace negotiations between the Israeli state and the Palestinian Authority on the future of relations between Jews and Arabs. The negotiation lasted several hours. There were four groups and each negotiated a different issue; the nature of the state; ceremonies and symbols; security; education and reconciliation. The students chose two chair-people, one Arab and one Jew, to conduct the negotiation. At the end of the negotiation we set up a “press conference” in which representatives from the 4 groups presented the agreements that they had reached and the points on which they remained divided. It can be said that agreements were more democratic and advanced than what occurs in the state today on the macro level. In the symbols and ceremonies committe they decided on changing the anthem and the flag to also contain symbols of the Arab community in Israel, so that the Arab community could also represent Israel. In the committee for international affairs and security they agreed on national service for Arab citizens and that the state would reinstate Arab villages in Israel, also providing them with compensation and infrastructure. Moreover, there would be no discrimination in the workplace, everyone will be treated equally in airport security searches, and Arab members of Knesset could be appointed ministers. The committee for the nature of the state agreed that there should be a democratic country that is for all citizens regardless of religion. A conclusion was not reached concerning the refugees, right of return and law of return.

The last day was devoted to analysis of the simulated negotiations, writing letters to the group, and a summary discussion. It was a day dedicated to analytical retrospection. There were some amazing things that students said in the summary discussion, such as:
– During a debate on the compromises that are made difficult by the fact people were lost in war, a Jewish participant said “you put the dead of the past in front of the dead of the future.”
– In the summary discussion a boy said “I have not encountered this desire for peace among us before. I am amazed by their great desire for peace. For me it starts now.”
– A Jewish girl said, “what sticks out for me is their strong desire for peace. I knew most of the Palestinians are normal like me. When they talk and they have tears in their eyes that they want peace. I learned that there is discrimination and injustice, and to hear it from them was very powerful.”
– A Jewish boy said, “when I first got here I thought we could leave the country as it is, a Jewish state that has Arabs in it, but now I cannot call it a Jewish state and think that it’ll be good for them.”
– An Arabic girl said, “I understand that symbols are very important to you, but look at the other side, there is a need to find an equation in which the other side will also have a heritage, so that both sides are represented and there will be no need to barricade ourselves.”
– An Arabic boy: “if I were a Palestinian leader I would give up some symbols, the same as Netanyahu should do.”
There were 32 participants from each side.
Youth Workshop for Brenner and Taybeh High School 1-2.12.14
“I have a dream that instead of Jews and Arabs we become ‘we’”
The workshop for Brenner and Taybeh high schools had 64 participants and was very similar to the one run for Brenner ad Nazereth high schools, except that the 3-day program had been fit into two, which resulted in a much more intense experience for the participants.
The simulated negotiations resulted in some interesting agreements that were more advanced than those currently being made on the macro level:
– The Education Committee agreed to establish an Arab university, the introduction of Arabic studies to Jewish schools from fourth grade, programs of study in history and civics will incorporate the Palestinian narrative.
– The Reconciliation Committee agreed that the State of Israel will recognize the injustice done by the State in the Nakba during the 1948 war and that the events will be taught in the school system. Official ceremonies will also incorporate the subject. Road and street signs will be in Arabic, proper Arabic not transliterations. The return of some refugees to Israel.
– Symbols and Ceremonies Committee agreed that the anthem should be sung twice, in Hebrew and Arabic. The flag should retain the two blue lines and also include a line in the style of the Kafiyeh. Ambassadors will be appointed regardless of their religion. The President will be a Jew because there is a Jewish majority.
Statements made by the participants at the end of the workshop.
– A Jewish girl said, “personally, I came to hear the voices from a sector of society that I never got to meet or know before. It was an extraordinary experience.”
– An Arab boy said, “It was also important for me to hear other points of view. I like and respect those opinions and we reached some agreements at the end of the simulated negotiations.”
– An Arab girl said, “It was a new experience in my life and it was good to talk about a lot of issues. I took all opinions into account. I do take it seriously. Every opinion I heard, I would continue to ponder over later.”
– A Jewish girl said, “In short, I’m leaving with the same views I had but with an understanding and greater acceptance of Arabs and their situation. There is a great need for meetings like these.
– An Arab youth said, “this experience is a first for me, and one I won’t forget for life because it is important. I hope that these experiences will received support.”
– A Jewish boy said, “I strengthened my opinions. I understand now how much needs to be done and how unnecessary this war is.”
– An Arab girl said, “I was particularly interested in hearing the opinions of teenagers like us, and not those of leaders. I have not changed my views but I listened to everyone attentively.”
– A Jewish girl said, “I came to listen and to hear. I understand where you [Arabs] are coming from. It all really resonated with me. It was important to get to know you all personally The part when we danced together and we were happy together, and all the teachers came and joined us. I hope we continue to meet again. I have a dream that instead of Jews and Arabs we become ‘we’”

Appendix: Two examples of the letters that the students wrote

A Jewish student:
This seminar was a corrective experience for me in terms of all that I had been mistaken in thinking. Also in terms of what that I wanted to hear but was prevented from hearing and all that I needed to know as a citizen of Israel, as a Jew, and as a human being, and I didn’t know until now. I am not writing a summary letter, because it is not possible after a thing like this, such an amazing experience that can’t be put into words, to meet people that I learnt to respect and admire so much more, and mainly to understand. I will just return to reality and the dry achievement of school, that did not prevent us the chance to analyse these topics in depth in the day-to-day. I won’t be able to just continue with my life as normal, and I think that all who experienced this seminar in a deep and real way won’t be able to just continue. So actually this is a start, this is a start of start, and in my opinion, this is the start of the change, which we have all been waiting for.

To my group,
It has been an honour to meet you in this lovely and very interesting meeting. I didn’t expect that we would have so much in common. You are people that can be respected. You didn’t attack us and you respected our opinions. You have good ideas and you believe in equality and want to bring it about. I hope that there will be many more Jews like you who have the same opinions about living in peace. I hope that you got a good picture of us and experienced that Arabs are not terrorists and they are human beings like you. Although there are a few among us, Jews and Arabs, that are racist, they need to be fought. I hope that you will speak about this meeting in your area and tell people there what happened here and the understanding between us. Well done all of you! I want to see you again that we will speak and deepen our acquaintance and continue with what we started here.